I created the following reading for advanced rhetoric classes. It addresses several dimensions of small, seemingly insignificant words like pronouns, including the ways these terms embody ethos, agency, power, and gender identity.

At the end, it also examines the conventions of using pronouns, particularly "I," in academic writing. 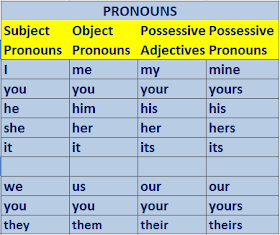 Simple Definition: A word that stands in place of a noun

These simple definitions can lead to more complex rhetorical questions like: 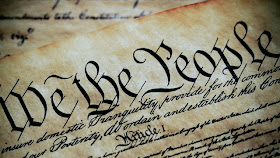 Pronouns are keys to ethos (more on ethos in my appeals lesson). Anytime an author uses a first person pronoun (I, we, etc.) they draw attention to their position and persona. By using "I," a person claims an individual stance, while "we" groups people together. This inclusive gesture can form community, as in the common example "We the people." It can also make dissenters resistant, as when women and people of color have suggested that "we the people" historically applied only to white men. Consider common resistant responses such as "What we?" or "Who do you mean we?" These replies suggest that the speaker has overstepped their bounds in describing the views of others.

Sometimes pronouns purposefully distance others to construct the speaker's ethos as different. These moves might be politically or racially motivated, as when one group refers to another group of people as "them" or "those people." Here the pronoun itself becomes a type of stereotype. Disidentifying with these others then tells the audience about the values of the speaker. 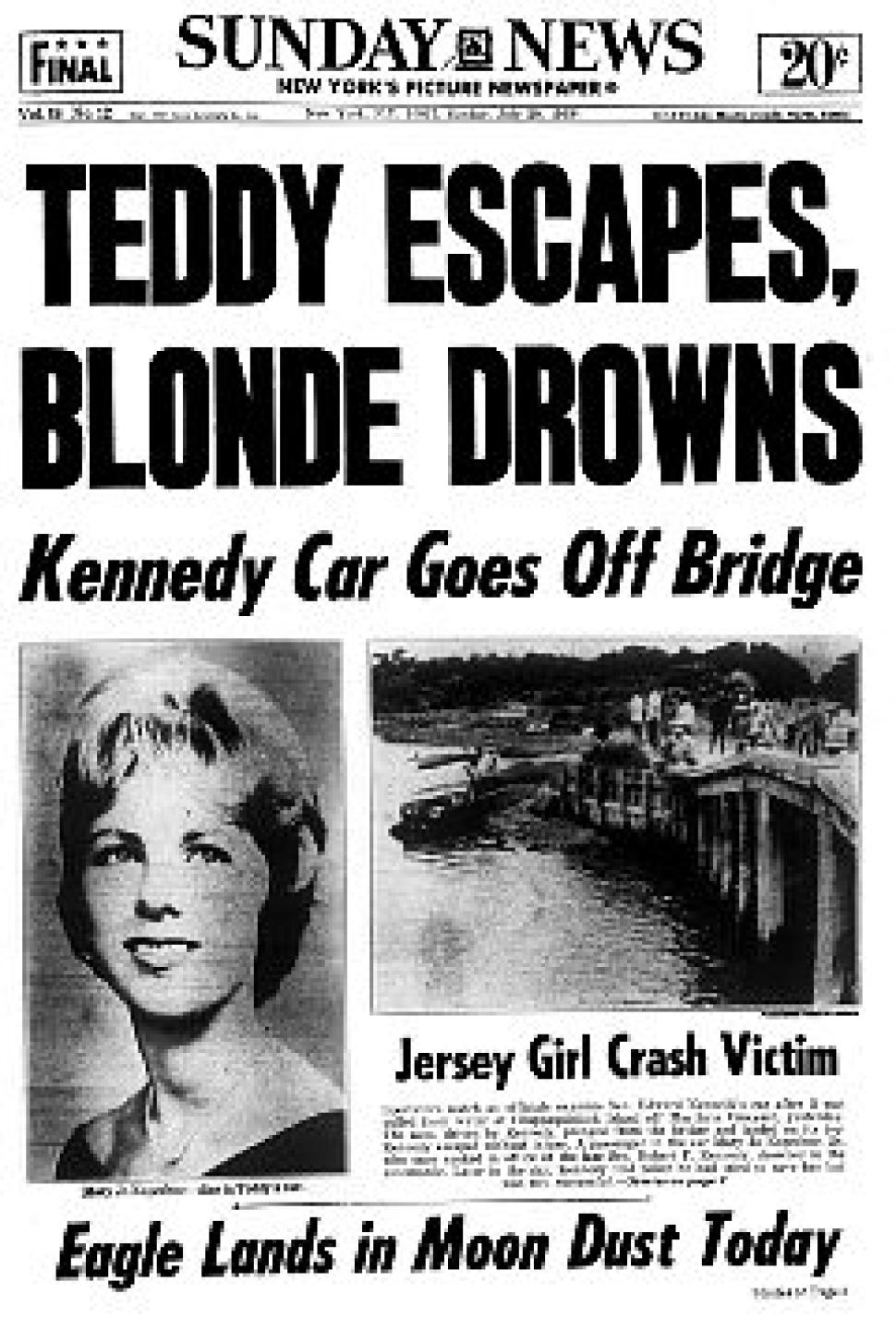 Removing "I" can hide responsibility, as in "the test kicked my ass," which removes agency from the student who performed poorly to instead blame the test.

Other times "I" is present, but the order of words still diverts attention from the human actor. Consider Ted Kennedy's "Address to the People of Massachusetts on Chappaquiddick" after he drove a car off a bridge, leading to the death of Mary Jo Kopechne. He describes the scene:


"Little over one mile away, the car that I was driving on an unlit road went off a narrow bridge which had no guard rails and was built on a left angle to the road."


He recognizes he was driving the car--to do otherwise could look evasive--but still he does not say "I drove a car off a bridge." Rather he shifts agency to the car along with the light and bridge, each given significant adjectives: "unlit," "narrow," etc. The headline at right uses the possession form, "Kennedy Car," instead of saying Kennedy drove. Descriptions of the lesser known Kopechne as "Blonde" and "Jersey Girl" stand-in for her actual name, and could make for fruitful class discussions as well.


An obvious way that pronouns convey power is through possession and command. Using "my" is a claim to ownership: "my children," "our car." And commands often use the implied you. "Go home;" "Take out the trash."

Getting to choose which pronouns to use is itself a powerful position.  Diann Baecker analyzes the pronouns used in university syllabi, for example. She finds that "you" is the most prominent, but she also suggests instructors tend to mask power by using "we." She cites research by Mühlhäusler and Harré that states, “We spreads the responsibility . . . We is a rhetorical device that allows the speaker(s) to distance themselves from whatever is being said, thus making it appear more palatable because it appears to come from the group as a whole rather than a particular individual” (Baecker 59).

She continues: "The pronoun we is an example of an ambiguous marker of power, which can be used both to indicate solidarity or community and as a means to coerce the audience into behavior that benefits the speaker. . . .there are specific rules for determining who can use the royal we and who must remain with the solitary I.” (Baecker 59).


When you use pronouns for yourself, they can even convey something about your mental state and your level of power. In "Your Use of Pronouns Reveals Your Personality," James Pennebaker describes research that examines "I" as a sign of self-focus. He argues that "Depressed people use the word “I” much more often" as well as "people who are lower in status."

Because there is power in assigning and accepting particular pronouns, it should come as no surprise that they affect the identities they name. Pronouns convey deep assumptions about gender in English. Using "he" as a default pronoun to suggest multiple genders, for example, can alienate many people.

Automatically using "he" can lead to wrong conclusions too. When students analyze texts in my classes, for example, many start out using "he," assuming an author is a man without checking.  The pronoun usage here conveys deep cultural assumptions about who we believe an author to be. I purposefully give students a text written by a woman on our first day so that they make this common mistake, which allows me to reveal this cultural bias.

If we don't know the gender of an author or speaker, the best choice is to go with the singular "they." Students can follow the guidelines for gender-fair language. This website on making language gender neutral also provides useful examples.

Singular they is also the preferred pronoun of many people who are nonbinary, gender fluid, genderqueer and agender. Choosing the gender of our pronouns allows all of us to define our identities in important ways, so it is absolutely crucial to use the pronouns each person designates.

Traditional views about grammar do not supercede people's identities. Language is not static, and these "rules" change. They/them are now accepted singular pronouns grammatically and more importantly important identity-marking terms. There may be even more change in the future--for example, pronouns, such as ze and zir have also been created by LGBTIQA activists. I plan to follow  The Pronoun Project and to learn from individuals telling me their pronouns.

Academic disciplines have certain conventions for using (or not using) pronouns. Scientists for example avoid "I" more than humanists, instead using passive voice to elide the human actor. (This is not always the case, and looking at many scientific journals shows that the "Don't use I" generalization isn't universal.) In this way, they shift focus from the individual experimenter and onto the scientific process.  By implying that any one who has done what's been done would achieve the same results, scientists reinforce the crucial ideology of their discipline: replicable results. So, even without an "I" statement they embed values and ethos.

Sometimes speakers more generally remove "I" to make opinions seem facts. "Abortion is evil." or "The death penalty is evil." These statements are judgments, and hotly contested ones, but by removing "I believe" from the beginning they seem to carry more weight than just one person's opinion. And, in fact, hearing "I believe" throughout a student essay anytime there was an opinion would weaken the paper.

In another field, one technical writing textbook recommends You-Centered Pronouns because they create "an audience centered-tone" that "foregrounds the reader's needs, preferences, and benefits." They continue: "Because the reader’s interest or benefit is stressed, the writer is more likely to help the reader understand information or act on a request." They focus on the genres of memos and manuals, which need to reach the reader in a particular way that will lead to action. These differing preferences for pronouns demonstrate that purpose in writing and analyzing pronouns is key.


Because "I" is often limited in several academic genres, student writers are often surprised to hear that they are "allowed" to use "I" in their papers. Many high-school teachers, in fact, forbid the word. I explain to students that like many skills, they will be deepening their writing practices in college. High-school teachers had good reasons to discourage first-person, but college writers must learn to use it effectively.

Why college students need to learn how to use first-person effectively: